Progress in Paradise...  We started off the morning yesterday with a brisk walk to the east, along our usual route.  We had one moment of excitement of the skunk kind, when a baby skunk (roughly 12" nose-to-tip-of-tail) burst out of the tall grass along the road about 15' in front of us.  Immediately Miki and Race were bouncing at the end of the leash, wanting to go introduce the skunk to their teeth.  The skunk completely ignored them, and instead calmly tracked down the night crawlers that the nearby sprinkler had raised.  Suddenly Miki ran behind me, and backed out of his leash.  I had no idea he knew how to do that!  Next thing I know, Miki is scampering at warp 12 toward the skunk, which is still ignoring him.  Not good.

Things happened very fast at that point.  I'm hollering at Miki to get his sorry field spaniel butt back with me.  As Miki nears the skunk, it whips around (those baby skunks can move fast!) and starts doing the stampy-foot thing that immediately precedes a spray.  Miki, jaws snapping, a look of happiness on his face, lunges toward the skunk.  The skunk sprays – I could see it – but misses.  His stink stream passes Miki about a foot away, and the light breeze blows it further.  Miki is still moving in.  The skunk hisses and jumps toward Miki, who pulls about 400 Gs to go into a complete reversal, nearly tumbling over backwards.  I'm yelling at Miki to stay away (thinking he's gotten some skunk-stink on him).  Miki runs back toward me and hides behind me, begging me to save him from the nasty skunk.  The skunk, meanwhile, goes back to munching on his night crawler.

After some careful inspection, I figured out that Miki had been only very lightly “painted” with skunk stink.  We continued on our walk, and then I left Miki outside all day to “air out” in the bright sunshine.  Amazingly, that worked – by evening he smelled like his usual self, unless you stuck your nose right in his fur. 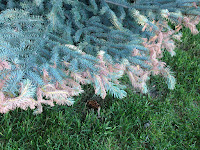 When we got back, I used the cool morning to finish pruning the spray-damaged new growth on several blue spruce (see photo at right) around our yard.  That was a very pleasant way to spend a few hours: easy work, beautiful environment, instant gratification as the trees looked great when I got done.

I spotted my neighbor Tim D. moving pipes out of his field, and I managed to get over to help just in time to get the last one out :)  Then the two of us quite literally leaned on our fence, talking, and playing with the dogs.  Race kept Tim very busy throwing a stick, and it was a lot of fun for me to see the delight on Tim's face as Race kept bringing that stick back.  Tim also wanted to see my new air compressor, as he'd never seen a screw air compressor before.  On the way in, he stopped by the brush mower, which he also hadn't seen before.  I think he lusts after my brush mower :)

Next up: mowing.  On a small scale, I finished mowing our yard.  On a somewhat larger scale, Rob L. (who lives a couple miles north of us) drove his swather over to mow the alfalfa on our neighbor's field (where the first two photos are from) and both of our fields.  The last photo is our south field, seen early this morning, when the cut hay smelled especially good in the cool, moist morning air.  That's 20 acres in total, and it only took him two hours – with another 15 acre field in between!  He stopped to chat for a minute, and showed off his machine.  It's quite a beast!  It doesn't work like the reel or sickle-bar machines I'm used to.  Instead, this one has 17 rotary blades, each hydraulically powered.  These cut the alfalfa at about 3" high, and they move up-and-down independently to conform to ground contours.  To keep the hay from being mulched by the rotary blades, a huge vacuum lifts the cut hay up and away from the blades, and drops it into a 5' wide windrow in the middle.  The most impressive thing of all to me: that thing zips along at 6 to 8 MPH while cutting, and independently swiveling rear tires let it turn (quite literally) on a dime.  Very impressive machine! 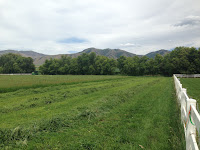 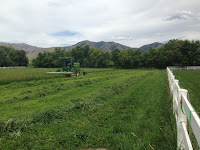 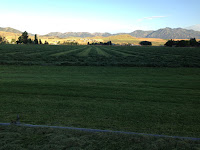 Some flowers from around the place: 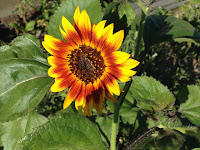 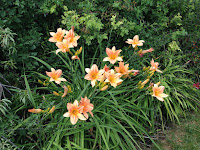 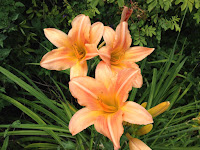 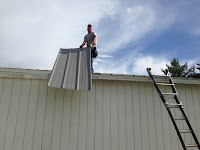 Later in the afternoon, Steve M. showed up to start taking down one of the little outbuildings on our property.  Last fall, he was part of a Questar Gas crew that was rerouting a gas main that went under (illegally) this building.  In the course of them doing this work, I mentioned that I was planning to tear it down (because we don't use the building, and want to use the pad for a backup generator, propane tank, and gas tank).  I was thinking of this as a demolition project, but he looked at it as an opportunity – for him to get a “free” boathouse.  After a little conversation, we agreed for him to tear it apart and haul it away.  Well, last night was his first attack on the problem, and he made great progress.  All the metal roof was successfully removed, no damage to the parts.  I gave him a hand taking all the junk out of the building, loading stuff onto his trailer, and making some measurements.

His wife (Janelle) stopped by to help a little later, and the two of them will be back every night this week until they've got it all down.  I'm guessing that will take all week, and maybe a bit more – there's quite a bit of work to do there!

It was a very busy day in Paradise!
Posted by Unknown at (permalink) 8:28 AM