Progress in Paradise, red-letter day edition...  Yesterday was indeed a red-letter day for Debbie!  It was the day of her six-week followup for her broken knee, with Dr. Higginbotham.  We had our usual amazingly different experience with (no) waiting: we got there ten minutes early for an 11 am appointment, and at 11:16 am we walked (well, rolled, in Debbie's case) out, finished.  It's really quite extraordinary for us to experience medical appointments that actually happen on time.  That never happened in San Diego!

All the news from the followup was great.  Dr. Higginbotham could find zero shifting of the bones since the initial exam a month ago, which is exactly what he was hoping for.  The swelling is down just as expected.  The good report means several things: Debbie is cleared to start (gently) weight-bearing on her injured knee, cleared to start using a walker to get around (freedom!), and cleared to start some (careful) physical therapy.  Woo hoo!  I'm seeing many more smiles since that report :)  Yesterday afternoon she made the first little trip around the house by herself, using a walker, and it went very well.  That's one little degree of freedom she's got now, and one less dependency on me.  All good! 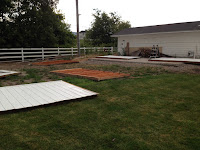 Steve M. and his wife Janae came by to continue working on taking down one of our outbuildings, which they're going to re-purpose as a boat house.  I've been working with them every afternoon (after they get off from work) to get it down.  Yesterday afternoon we hit a milestone: the entire building is down, without any major damage to it.  What you see in the photo are sections of wall (six in all) that we've laid down on the ground.  In the background is the concrete pad those walls used to stand on.  Behind the pad is the north wall of another outbuilding that we're keeping.

Each of those sections of wall weigh roughly 500 pounds (I'm guessing on that, but I don't think I'm far off).  How did one old man, one very slight woman, and one young man with lots of sports injuries get those walls down, safely?  One word: tractor :)  Some walls we lowered toward the tractor by holding the wall up with the front fork and backing slowly away (lowering the wall).  The other walls we lowered away from the tractor by securing a chain to the top of the wall and the fork, and driving slowly toward the wall.  In each case, they all came down very nicely and (what I cared about most!) safely.  This was a much better plan that Steve's initial plan, which was for him and Janae to stand under each wall section as we brought it down, lowering it with their muscles.  I'd have had a couple of squashed Mormons – difficult to explain to the local authorities – if we'd done that!

This afternoon, or possibly early Saturday morning, Steve and Janae will be back with a trailer to pick up the shelving they're going to use, and to take away a pile of junk wood that came out of the building.  Then a little later on Saturday morning, a small horde of young Mormon men will show up to help us load the wall sections onto a big trailer that Steve's bringing down.  The plan is that I'll get on one end of each section with the tractor, and lift that.  The horde will get on the other end, and lift that.  Then I'll drive slowly toward the trailer.  The trickiest bit (really the only tricky bit) is that the gate through our fence is 8' wide, and the wall sections are 8' 6" wide.  We're planning to lift the sections over the 42" high fence.  If enough young men show up, that really shouldn't be too hard.  The tractor won't have any problem.  Once they load up those wall sections, the job is complete!

Then I have another project: backup generator, propane tank, and (maybe) a gasoline tank...

At noon today we're hoping to have a couple of visitors: Amy and Steve L., who are driving up from Salt Lake City.  We met Amy when she worked for us back in the '80s, when we had a business selling software to optometrists and dispensing ophthalmologists.  She's one of several employees who became friends.  She and Steve moved out of the San Diego area years ago, but we've kept in touch since then, mostly through email.  We haven't seen her at all in that entire intervening period – 26 years!  She and her husband happened to be in the area (Steve manages electrical power plants, and there's one here that's his), so we're taking advantage of their proximity to get together.  Yay!

This morning I have an appointment for “restoration”, which basically means patching the crown that they drilled through to do my root canal last week.  Sounds like fun, doesn't it?
Posted by Unknown at (permalink) 6:38 AM