Progress in Paradise, compressed air edition...  On Friday the folks that made my new workbench called me and said it was ready for delivery – a month early!  We arranged for them to bring it on Monday (tomorrow) morning – which means that today I had to rearrange things in my wood shop to make a place for it.

With all the construction I've been doing in there, the place was a half inch deep in wood shavings, sawdust, dirt, and all sorts of jetsam and flotsam.  So this is a good time for a little cleaning.  When I considered that, it of course occurred to me that using a compressed air gun would be mighty handy to blow all the accumulated dust off my tools, shelve, etc., onto the floor where I can vacuum it up easily.  And that made me think of that beautiful new air compressor I have sitting there, waiting to be plumbed up.  I couldn't stand it.  So I ran to Home Depot and got enough plumbing parts to put a couple of female 1/4" quick-connect couplers on the back of the compressor.  Once I got all that put together, I had a great way to use that air compressor between now and the time I get all the copper pipe installed.  Hooray!

After that, 15 minutes of work with the air gun (very impressive, with 150 pounds of air pressure behind it!) got every bit of surface dust onto the floor.  I vacuumed half the shop and rearranged everything mo' bettah.  Then it started to get hot, so I put off the last half until early tomorrow morning, when it should be about 50° in there. 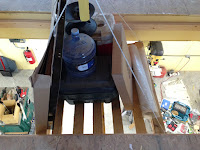 One of the things I did while rearranging things was to take a bunch of stuff up to the second floor for storage.  Mostly this is stuff leftover from our move up here, and I just never took it upstairs.  That's too much like hard work!  Except that it's not actually so hard, since I have the electric hoist and hatch, which happens to be directly over my workshop.  The photo at right shows one load of stuff being lifted through the hatch.  The pallet is tied by four ropes to the hoist, which is just out of sight above the photo.  That particular pallet load had about 150 pounds of stuff on it (mostly in that green bin).  Hoisting it up this way is ever so much easier than hauling up the stairs manually!
Posted by Unknown at (permalink) 1:47 PM