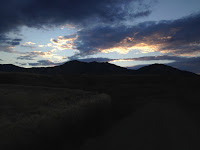 (Early) morning in Paradise...  Miki, Race, and I left on our walk a bit earlier than usual – when there was just barely enough light to see.  By the time we got back, the hills to our west were just being brushed with sunlight.  On the way back home we had enough light to see well.

The highlight for the dogs was a sudden rustle of motion in the dry barley to our left as we came down the hill.  None of us could see whatever it was, so they were on full alert: eyes wide, ears perked, hackles up.  After a few seconds of this, a magpie sauntered out, took one look at the three of us, and launched into the air, away from us, squawking his unhappiness.  The dogs went bananas :) 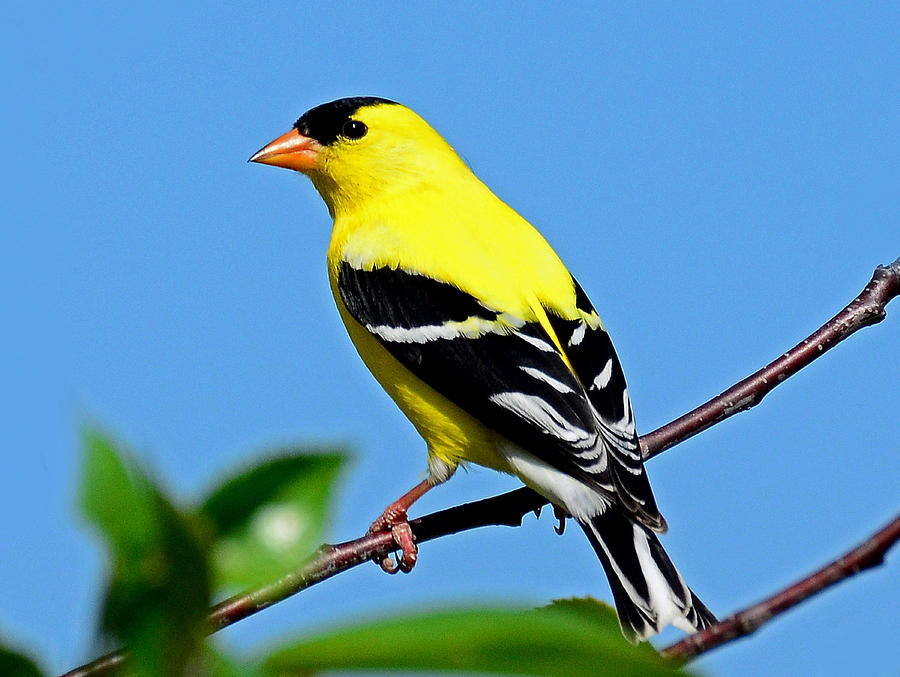 The highlight for me was a male American Goldfinch (not my photo at left) whose yellow was about as glorious as its possible for yellow to be.  He flew from behind us, around my right shoulder to my left, and landed on a barbed wire fence not 4 feet away.  The dogs didn't even notice him.  I just stood there, gawking, for close to five minutes until he decided it was time to leave.  I was afraid to move, so I didn't get a photo.  The dogs thought we were resting, and laid down in the road, luckily for me.  What beautiful birds they are!

Speaking of birds...  We've been keeping hummingbird feeders out for the past few weeks, and we're now regularly attracting groups feeding at once.  The record I've seen at the same time so far is six – not quite the hordes we once had in Jamul, but we gotta start somewhere!  Oddly enough, so far I've only seen on male at the feeders, and just one time – all the other sightings have been females.  We've also had orioles visiting the feeders, as many as three at once.
Posted by Unknown at (permalink) 6:24 AM