Progress in Paradise...  Debbie and I managed to get all the EVA foam laid down in her indoor agility court, on the west side of our shed.  The first photo below shows the work in progress; the second shows the finished result.  Installing this stuff was actually quite easy, though we had to learn some new tricks along the way.  One unexpected challenge: the squares of foam are cut to metric size.  Though they were sold as one yard square of 3/4" thick foam, they are actually one square meter (39.37" on a side) and 2 cm thick (which is slightly more than 3/4").  This made our layout just a tad more tricky than we'd first imagined, as of course our room is laid out in feet and inches.  Oh, well :)

The EVA foam is pretty tough stuff.  Cutting it with a knife, or possibly with big shears, looked like it would be a real pain in the patoot.  So I did the obvious thing and looked it up on google: presto!  A whole world of video tutorials, written descriptions, etc.  The answer turned out to be straightforward: use a hot knife.  Great.  Where does one get a hot knife?  Well it turns out I already had one, and didn't even know it!  Last year I bought a Weller soldering gun, to do some heavy duty soldering.  In the kit was a pair of hot knife bits.  They can only cut about 1/4" deep, but three passes and I had it.  It worked like a champ, especially when we figured out that Debbie could separate the cut while I wielded the (massive) soldering gun.  I made one mistake while doing the whole floor, and we managed to re-use the square I messed up anyway. 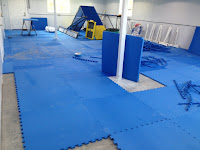 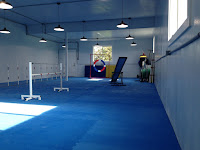 While we were partway through this exercise, a crew from Statewide Paving showed up to “seal” our driveway.  This isn't something I knew about until last year, when our neighbor Tim D. – a former paving supervisor – educated me about it.  This is an area of business rife with shady operators and inferior products, so choosing the right product and contractor is important.  These folks Tim had done business with before, and he knew that they did good work with the best product (a pure asphalt spray that contains no water).

The photos below show them at work on two of the three phases of the job.  The first phase is simply cleaning off the driveway (no photo).  They use a special wheeled blower with a 10 HP gas engine; it's powerful enough to blow fist-sized rocks right off the driveway.  They also scrape any heaped-up soil or other junk off the pavement.  This first phase is more than half the labor of the whole job.  The second phase is filling in all the pits and cracks with a special thick asphalt (first photo below).  Then, finally, they spray on the sealer (last photo).  The guys were really good with a piece of plywood used as a shield to keep the spray off our lawn and plants. 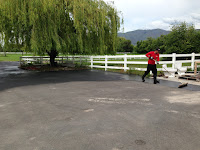 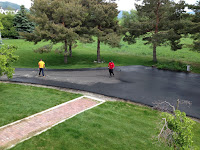 Because our driveway had never been sealed before, they're going to put two coats on.  The second coat goes on today.

So what does a sealer do, anyway?  It makes the top surface of the pavement watertight, and (when done right) fills in all the little pits in the top surface.  Both of these effects prevent water from infiltrating the pavement and then freezing in the winter (which would crack the pavement).  Asphalt pavement, when first laid down, is a mixture of asphalt, gravel, and sand.  It's not solid, though – in fact, it's rather porous.  The sealer puts that waterproof layer on top...

Posted by Unknown at (permalink) 8:03 AM