Progress in Paradise...  Debbie continues her steady improvement.  She no longer looks like I beat her :)  She still hasn't graduated to the walker yet, though.  I cut her a little bouquet this morning, from flowers around our yard – very cheerful blue, red, and orange! 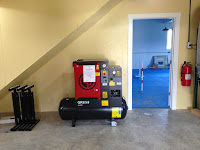 I didn't have to move pipes this morning, so I spent the (relatively) cool part of the day doing some organizing and cleanup in the barn so that I could move the air compressor into place.  Then I actually moved it, making extensive use of the tractor to do it as the beast weighs 650 pounds.  At right is the beast in all its glory, sitting in the correct spot.  Now all I have to do is hook up 240V, 120V (yes, both!), an air intake, two drains, and the air output (which will be piped all over the shop).  By the time I finished with this, I was drenched in sweat.  The air conditioned house felt might good at that point!

I've got a toothache, I think under a crown that was installed a few years ago.  I called to make an appointment with the dentist I met a couple months ago at Hyrum Tire, Dr. Lance Gunnell.  I'm seeing him on Thursday, when he's in his Hyrum office, just four miles away.

Last year a crew from Questar Gas came out to re-route a gas line that the previous owner of this property had built an outbuilding over.  I mentioned to the crew that I intended to knock that building down, and one of them said he'd like to take it.  He'd saw it into pieces with a sawzall, and then put it back together on posts to make a boathouse for his wife.  Not only would he put it to good use, he'd do all the work of taking it down.  Of course I said “yes” to that!  Well, I lost track of this fellow's name and number, and I wanted to get that process started – as we want to put a backup generator on the slab.  What to do?  I called a different Questar Gas employee, another guy who had been out here.  I explained my dilemma to him, and he said he'd ask around the office for me while I held on the line.  About 30 seconds later, another guy got on the phone and said he knew exactly who I mean, a guy named Steve M., and he'd have Steve call me right away.  Another minute or so, and Steve called me – and now we have arranged for that building to be removed next week.  The people here are so helpful, and the community so small, that things like this happen routinely.  This would almost certainly not have been the case when we were living down in California...
Posted by Unknown at (permalink) 9:09 AM