Progress in Paradise...  Today is “paperwork” day – time for me to catch up on almost two weeks of accumulated paper.  The pile is getting too tall :)

On our dog walk last night, I spotted a flock of birds I don't know.  There were about a dozen of them, poking around in the sopping soil underneath a sprinkler in an alfalfa field.  When I got back, I searched through our Sibley, and the closest thing I can find is a white-faced ibis (at right, not my photo).  The birds were backlit, and in that lighting they appeared to be completely black.  But color quibbles aside, everything else matches – and nothing else in the book did.  There's another ibis (the glossy ibis) that it might possibly have been, but they're supposedly rare here (and the white-faced ibis is common).  It was interesting watching them poke those long curved beaks deeply into the soil.  Presumably they're looking for either worms or bugs.  Imagine how disconcerting that would be for the victim – one second they're “safely” ensconced in their dirt fortress, the next second they're on their way down a monster's gullet!

I moved sprinklers for my friend and neighbor Tim D. again this morning.  His grand-daughter Taylor came over to help when I was about halfway through.  I was sopping wet by the time I got done, as the pipes I had to move were in waist-high (and very wet!) alfalfa.  In some places the field was so muddy that it threatened to suck the boots right off my feet!  I also set up sprinklers around our house – sixteen sprinkler heads are currently going all around us. 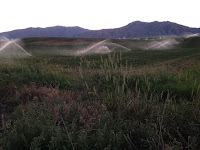 On this morning's dog walk, we left well before sunrise and I caught the sprinklers backlit by the dawn (at right).  The dogs were thrilled by the cold (48°) wet air.  The humidity was high in general, but even more so downwind of the sprinklers. 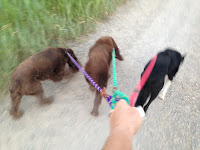 When we're walking uphill, Miki and Racer are straining at the leash to go faster, and Mo'i (the old man) is straining at the leash to go slower.  I'm stuck in the middle, looking like the dogs had collaborated to try to pull me apart.  Going downhill it's a whole different story: Mo'i is now the one straining at the leash (he's got the green leash in the photo at left).  That photo was taken just before dawn, as we were headed back home this morning, marching down the steepest hill on our path.  From observation, it appears that Mo'i's walking speed can be computed by a constant added to the inverse of the tangent of the slope, adjusted linearly by the inverse of the temperature.  I can guess our pace pretty easily :)  The other two dogs, though, are almost constant speed walkers.  There is perhaps a little derating for temperature, but the slope doesn't seem to affect their pace at all!

It's paperwork time!
Posted by Unknown at (permalink) 9:33 AM