Progress in Paradise...  Debbie keeps getting a little better every day.  Today we had a milestone: she was able to dress herself after washing up and shampooing her hair.  Also, she thinks she may be ready to try the walker in a few days.  That will be a big milestone, because then she'll be able to get around (the first floor, at least) on her own.  In a few minutes Bruce and June N. will be coming over to visit her.  They are the couple who helped us find this house, and they've become friends.  They live just a few miles south of us, in Avon. 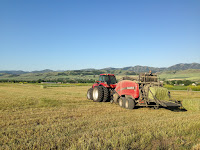 This morning the dogs and I took our usual walk, and we ran into the crews moving and starting up the irrigation for the day.  We also passed one of the tractor/baler machines that have been baling up all these fields of alfalfa.  It appears to have just stopped in the middle of its work, probably when the driver knocked off for the day.  There are several common sizes of hay bales used around here, and this baler makes the biggest ones.  These are very highly compressed, much more so than the small bales I'm familiar with.  Each of these bales weighs around two tons.  No throwing them around!  You have to have a fairly large tractor with special hay forks to move these suckers around.  The farmers like them because they are so highly compressed; it makes the hay stacks more compact. 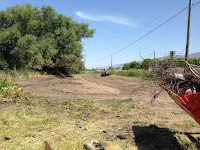 After our walk, I helped my neighbor Tim D. move his irrigation string, and then he volunteered to help me put the finishing touches on the ground leveled out yesterday with the giant loader.  Tim drove all kinds of machines that moved earth for almost 40 years, when he worked for LeGrand Johnson's paving division.  He's an expert.  All he had to work with was an old Massey-Ferguson tractor (he's named it “Betsy” and a simple blade.  With those tools, he turned yesterday's rough work into a piece of finished work.  That's him at right.  He's doing me a huge favor, but I could tell that he was having a lot of fun.  The big grin was a giveaway :)  Afterwards he and I had a big glass of limeade while he visited with Debbie.

I did a bit of the finishing work with the loader on my tractor.  I knocked down a couple of sharp corners, and flattened out a ridge.  To get ready for this work, I had to take my backhoe off.  That's always a tricky thing to do.  It requires futzing around with the hydraulics to get the backhoe positioned perfectly to take the load off the two pins that hold it in place.  It usually takes me about a half hour, but today I did it in just 20 minutes.  I'm thinking that maybe I should just spend a day practicing this until I actually get good at it :)

Now I'm hot and tired, and looking forward to a nice visit with Bruce and June!
Posted by Unknown at (permalink) 2:59 PM