Paradise update...  Well, Jimmy and Michelle B. are on their way home.  We had breakfast together at Herm's this morning, and then they set out for St. George.  We had a lovely day with them yesterday.

First we drove out to Hardware Ranch and partway to Ant Flats.  On that trip we saw a beaver working on his dam, a half dozen or so kingfishers, and an osprey gnawing on a fish atop a power pole, while a magpie tried to steal the fish away.  On the way back down from Hardware Ranch, we took the Left Hand Fork road and moseyed along it for 5 or 6 miles.  That's a beautiful drive in a steep canyon with a burbling brook at the bottom, and there are trails galore that leave from it.  This area is just 30 minutes or so from our house, and I suspect it will take us several years to explore it all.

After this, we drove down to Porcupine Reservoir as far as the road would take us.  I was hoping to share the loons with Jimmy and Michelle, but we didn't see a single loon anywhere.  We did see lots of baby farm animals though: goats, horses, cows, and sheep. 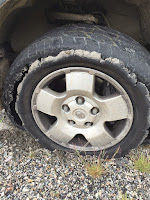 After this we headed over to Brigham City to have dinner at Maddox House.  On the way down toward Mantua in Sardine Canyon, traveling at 60 MPH, we had a special surprise: a tire failure.  Our left front tire started making some odd noises, then just a few seconds later it disintegrated – lots of loud noises and smoke.  The truck was perfectly stable through the tire issue; slowing down, driving off the road, and stopping were no problem at all.  The ABS system kicked in when I turned to leave the road, and it worked perfectly – we were rock-solid stable throughout.  We piled out of the truck and went to work to change the tire.  Partway through this effort, a sheriff pulled up: Brian Nelson.  He was incredibly friendly and helpful.  First he lent us a star wrench, which was much easier to use than the single-handled wrench that came with the car.  Then when I ran into a lug nut that I couldn't break loose, he got on the wrench with me until we got it going.  He helped raise and lower the jack.  When we were all done, he brought out some clean-up towels to get the worst of the grime off our hands.  We all left the scene with big, happy smiles on our faces.

But those smiles were soon supplanted by moans of gustatory pleasure as we dug into our meal at Maddox House.  Between the four of us we had filet mignon, ribeye steak, fried chicken (me!), and salmon.  All was delicious, as were the accompaniments: homemade rolls, raspberry butter, carrots, birch beer and sarsaparilla.  None of us had any room for dessert, dang it. Someday I'm going to get to try one of their fruit pies!

After we staggered back home, holding our bellies to salve the pain of being so full of good food, we had a fun evening playing cards.  The four of us teased each other and laughed for hours, and we didn't retire until way past my usual bed time.  Jimmy and Michelle promised to come up again, sometime later this year, for a longer visit.  They also volunteered their slave labor to help around the place, a promise which I am certain they will regret!
Posted by Unknown at (permalink) 11:09 AM