Fun with big data...  On this web site you can check the popularity (in America) of just about any given name.  The site has a disclaimer for data prior to 1940.

The chart at right shows the result for my own given name (“Thomas”).  You can see that “peak Thomas” (the raw data is downloadable) was in 1952 – the year I was born.  I've always assumed that I was named after my dad, but (perhaps coincidentally) my name was also at its peak popularity that year. 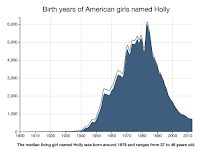 My wife's given name is Deborah, and when I checked her name the results were even more dramatic (at right).  “Peak Deborah” was in 1954; she was born in 1955, and at that point the name was more popular than “Thomas” for boys.  But prior to 1944, there were almost no women named Deborah!  And these days, newborn girls are only rarely named Deborah.

I tried about 20 names from my family or Debbie's, and the results were quite a surprise to me.  Try some of your own, and if you find something surprising, leave a note to tell us about it!
Posted by Unknown at (permalink) 5:12 AM